and I'll be going to Brighton. Not forever, mind, just for a day. My friend Mabs and I had spoken about this for a year or so, but we never got around doing it. He's normally busy as hell, travelling the world due to his work, and then it was me who was busy. But we finally agreed on a date and tickets are booked, so I'm looking very much forward to the day we're going.
Up to now I wasn't really sure which bike I should ride. For a day trip it needs to be comfortable (saddle, mainly) and in good working condition. Okay, I know that, as a mechanic, all my bikes should be--and they are--although the Viscountess has a headset problem I need to fix, and the red flash's left crank arm had suddenly come loose one day. The blue bike has a bit of a ticking sound around the handlebar and I cannot really figure out what's going on with it. (I have an idea, but need to investigate.) All of those little problems need to be taken care of, but I'm also quite keen on riding the newest addition to my collection. So today I took the G.P. for a little spin in the sunny cold and you would not believe the big smile on my face--I just couldn't help it. After adjusting the Wrights saddle a tiny bit, it felt as if it were made for my arse and I've decided that this one will be the bike I'll take to Brighton. My friend said I should put on some puncture-proof tyres, but I believe I'll be fine with the NOS Raleigh gumwall tyres I recently acquired. They were absolutely fine on the bit of gravel path along the canal.

The bike is a bit on the bigger side, but I have no difficulties riding it. In fact it feels rather comfortable. In general Viscounts have a relaxed geometry, ideal for racing, touring, or commuting. They are all-round talents, those bicycle. I will, however, change the wheel bearings beforehand as, at the moment, I feel they're a little stiff, which takes a bit more effort. New cartridge bearings make all the difference. I've changed the brake blocks to Continental Kool Stop ones, as the original pads didn't do anything in the wet, as I had to learn, and I've got those pads on three other bikes and am rather happy with them.
Anyway, I believe the alloy forks are contributing to the comfort as they have a bit of bounce in them, and the frame itself feels as if it's not as stiff as the smaller ones I have. In fact, riding the G.P. reminds me a lot of my Sprint, which was basically the same size (24" seat tube and 22.5" top tube). Those of you who remember that bike will know that it was one of my most favourite bikes, even though on the low end of the Viscount production line. Talking of the Sprint, after crashing it into a bollard back then, and then being stored in a container, it's now gone to a good cause: helping my friend Ben from BikeBox in Dalston.

The bike's duty is to draw some attention. Every time I pass it my heart sobs a little, but I'm also proud that it's visible, representing Viscounts.
Posted by Stella at 09:14 5 comments:

... and it's pretty obvious that I'm not a morning person. There I was, cycling to work through Regent's Park, minding my own business, when another cyclist pulled up next to me and called out, 'Good morning!'
Me, a little startled, called (in not the friendliest tone, admittedly) over the shoulder, 'Can I help you?'
The cyclist pulled up again and said, 'I'm sorry, but I forgot your name.'
Huh? I hit the brakes to find out who's chasing me in order to get his memory refreshed, then replied, 'Stella.'
'Ah, yes, Stella. Of course. This is Biscuit.'

And with that I was awake. Of course I know Biscuit, I even conversed with its owner quite a few times, he's a regular visitor of this blog and a proud Viscount--the above mentioned green Biscuit. All morning grumpiness was replaced by sheer excitement; what a thrill to meet another rider and Viscount family member. The strange thing, though, is that he's not even from London. See, London's a big city, randomly running into someone like this is quite an achievement, but running into someone you've only met online so far and that on your way to work is rather astonishing. This is the second time it happened to me; last time was a friend--Viscount owner, of course--from Staffordshire, who've I'd just met in person at the Death Fork Rally 2 and who's son's started uni here in London. So, yes, chances he'll come to London are great, but what are the odds he happens to drive past me on my way to work?
Well, whatever the reason and weird constellation of stars, I always love those random run-ins. The one this morning made my day, and I told everyone at work about it (and earned quite a few head shakes). Why is it that nobody gets my Viscount fever? As many bikes I ride during the day, Viscounts or Lamberts always feel like 'home' to me.
Next time I'll hopefully give Biscuit a whirl. The bike has been done perfectly. Sorry for the bad light, but I didn't have too much time to find a better spot.

It called and I came to welcome yet another Viscount into my loving arms. This time it's a beautiful Viscount Aerospace Gran Prix, which is essentially the same bike as my Lambert G.P. Deluxe--just under a different branding and in white/blue. I found this bike on eBay--no, wrong, one of my Viscount family found it and pointed it out, all I did was go and make sure it goes to a good home. It arrived at the shop on Friday, but I couldn't touch it until today, so you can imagine that I was all eager to get to work.
The story behind this bike is that an Australian couple moved into a house (here in UK), after the old man, who lived there beforehand, had passed away; and the bike was left in the shed. They didn't think anything of it and filled the shed up with their own belongings until they now, 25 years later, moved out and de-cluttered the shed. The bike emerged again and they wanted to throw it away. Their window cleaner thought it would be a shame, took it, put it on eBay and the rest is history. I put the bike together (it was partly dismantled), pumped up the tyres and took it for a really quick spin around the block. Man, it felt familiar immediately. Sometimes I think you could sit me on a bike and let me ride it blind folded, and I'd recognise a Viscount or Lambert. Smooth, even after 25 years of not being ridden! Okay, the headset's a little stiffer than it should be, and the cables are seized up, but that's all the bike needs doing, really. I could even move the seat post up without any problems. The powder coating is in very good nick, almost immaculate, and the blue bits are beautifully hand-painted. It came with a thermos flask, which had my colleagues in stitches.

But enough of the talking, here are the pictures. Be prepared to be amazed!

I've said it for some time now: I'm determined to re-create the 1973's magazine cover picture of that woman sort of sitting on a Viscount. So today, when I went to see my friend Ben, I suddenly decided he could take a picture of me, since I was wearing boots and--what a surprise--riding my red flash.

Please feel free to howl with laughter at my first (of many) attempt: 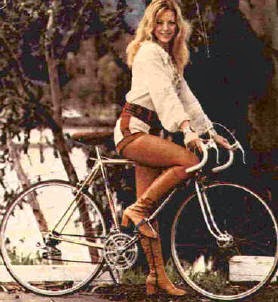 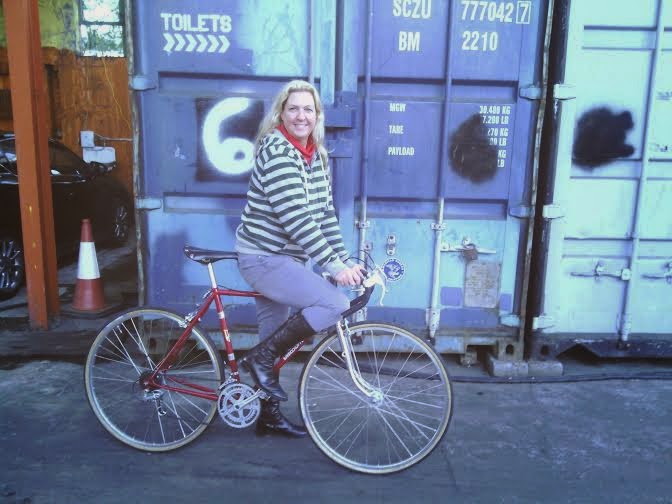 I admit that I look somewhat hideous in the picture, purely because I appear more like a whale stuck in a frame than the elegant and gracious girl I aimed to achieve. Guess it's partly because that frame in the original advert is much larger. The background isn't ideal either. Gave me the giggles when I uploaded it and I'm always happy to share so you can have one, too.
Note to self: need to try harder.
Posted by Stella at 08:13 2 comments:

Not too long ago, a reader sent me an e-mail, eager to share a picture of his Viscount Sebring commuter, which found its way to him by law of fate. As every Viscount owner I know, he's properly smitten by those bicycles and I asked him to tell me the story of the bike and him 'getting together'. That e-mail inspired me to post a call for submissions for pictures and, if possible, a write-up about people's love affair with their Viscounts or Lamberts and I'll put them on this blog. Let's spread the word; there's really nothing like a ride on those bikes.

My local Craigslist bicycle listing showed this Viscount, resplendent in it's 'bright' blue paint pictured in a grassy back yard in somewhat blurry mobile phone pics. The owner was keen to point out it 'Was from the midwest and still had it's stickers to prove it!' I considered his asking price-$60 and thought to myself: I've got one Aerospace G.B. in pieces and one Aerospace Pro frame & fork in my size waiting to become a 'special' project in the near future, what am I going to do with another Viscount/old 10-speed anyways? I emailed the seller and asked for his best availability to see the bike but never followed through on setting a date and time, so I let it 'ride', pardon the pun. About two months passed and I saw the Sebring listed again but thought to myself, 'What am I going to do with another...' you get the point. A week or more went by and something told me to at least take a look at the bike, so I arranged to visit the seller who was about a half hour away from home. I loved the look of the bike and it's blue frame, so it was love at first sight. The seller rambled on about his 'junk picking' of bikes that he was repairing and selling, although 10-speed road bikes weren't really his thing. He pointed out that the bars and stem were swapped out as the originals were missing some pieces, although he had them. Besides one shift cable, and the seat, the rest of bike was original so I struck a deal for $40 and the bike came home with me, no test ride needed. Upon getting it home, I filled the tyres with air and took it for a spin...ah, the Viscount 'Affect' was upon me! It was immediately apparent why I love old road bikes-svelt racers or 'heavy' tourers, they just have a way of 'gliding' along without much upset-so refined! I spent time cleaning off the old grease, swapping out the fossilized brake pads for new, exchanging the seat, and converting the drop bars to flat with lovely oldish DiaCompe brake levers and moto-grips.
What's in the works for the Sebring 'Pub Bike'? I set of 'vintage' Bluemel fenders (proper UK made!). A longer, one-piece alloy seatpost. Alloy rims laced to the original Shimano hubs. New tyres (as you spell the word). A Pletscher rear rack. Maybe one day new transfers over a glossy new coat of paint but we'll see... ;)
Posted by Stella at 13:44 No comments: